EngSci alumni Todd Reichert (0T5, UTIAS PhD 1T1), Cameron Robertson (0T8, UTIAS MASc 0T9) have a need for speed. They and their team of researchers and engineers are behind the world’s fastest human-powered vehicle. The bullet-shaped bike, called Eta, broke the world record for such vehicles on September 14, 2016, reaching a top speed of 142.04 km/hr. Three days later, the team topped that with a new speed of 144.19 km/hr. 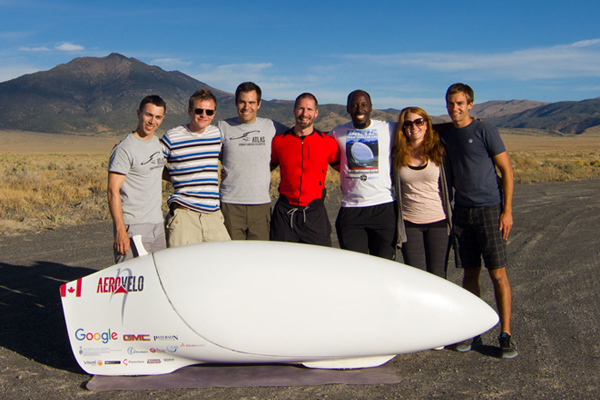 The Aerovelo team with their record-breaking device!  (Photo: Anupam Singhal)

The world records are only the latest in a long line of human-powered “firsts” for Reichert, Robertson and their company, Aerovelo. In collaboration with U of T Engeering, they previously built the first human-powered ornithopter, were the first to achieve sustained flight of a human-powered helicopter, and last year set the human-powered vehicle record at just under 140 km/hr.