For over 85 years, Engineering Science has been a flagship undergraduate program in the Faculty of Applied Science & Engineering, and one of most selective and advanced in the world.

As the program has evolved over the decades two defining features have remained the same: a strong focus on math, physics and science forms the core of the program, and students choose an area of specialization (a major, or "option", as it was also known) after two years of fundamentals courses.

As the name Engineering Science implies, the program combines advanced instruction in engineering and science.  This does not seem revolutionary today, but it was a radical shift from the philosophy that guided the engineering faculty in its early days. 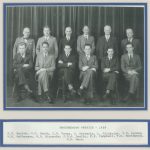 The EngPhys class of 3T8-the first class ever to graduate from our program.  Shown are all six of its graduating members and some of the professors who taught them.

The Department of Physics especially lamented this decision.  Toward the end of World War I, Physics Professors J.C. McLennan and E.F. Burton (seen at back left in the photo below) proposed a visionary new joint program of math, physics and engineering. It was their first of several unsuccessful proposals to establish what would ultimately become Engineering Physics (later re-named Engineering Science).

Undeterred, it took Burton several more attempts over the next decade and a half to convince the engineering faculty of the need for the program. The result was the creation of a new department in 1934 called Engineering Physics (EngPhys), in which students would enroll but which would have no faculty members of its own. EngPhys instead relied on professors from existing engineering and physics departments for its instruction, as is still the case today.

For many years the upper year options (now called majors) included subjects related primarily to physics (see graphic below). In 1958 the Chemical Engineering option was created. As a result, the program's name was changed to Engineering Science (EngSci) in 1962.

Since then, EngSci's offering of majors has continually evolved as exciting new areas of research and technology have developed.

Over the decades, the EngSci program majors have evolved as new fields of research and technology emerged.

EngSci's unique structure has made the program nimble and able to respond quickly to emerging areas of research and technology, often creating the first Canadian undergraduate program in a new field.

The two foundation years establish a strong fundamental background for students to seamlessly pivot in any direction in their third year. The program's multidisciplinary nature, strong science foundation, and emphasis on engineering design have produced graduates that are able to bridge disciplines, tackle complex problems with creativity, and work on diverse teams.

The over 6,500 graduates of the program have included many leaders in industry, research and academia in a very wide range of subjects.

Are you a current student or graduate of EngPhys or EngSci?
Join the EngSci group in U of T Engineering CONNECT to tap into our global alumni network.