Skip to Main Content
U of T ENGINEERING
Posted May 6th, 2016 by Christina Heidorn

Walter (Bud) Redvers John Brown was born on August 22, 1925 and grew up in Toronto where he became a proud member of the Engineering Physics class of 4T7. Over his long and distinguished career he worked at some of the hotbeds for innovation at the time.

After graduating, he became the Senior Physicist at Kodak Research Laboratory in Rochester, N.Y., while completing a Master of Science in Physics at the University of Rochester in 1949. At Kodak, Bud researched the psychophysics of colour vision and discrimination, and designed optical research instrumentation. In 1956, the Optical Society of America awarded him the Adolph Lomb Medal for his noteworthy contributions to optics before the age of 35. 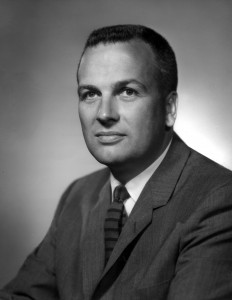 In 1956, Bud joined the Physical Research Laboratory at Boston University, where he was Chief of the Field party at the Atlantic Missile Range in support of the first intercontinental ballistic missile program, “Atlas.” He completed his Ph.D. at the University and, after the laboratory became part of the Itek Corporation in 1957, became the Technical Manager of a large graphic data processing system for military application that converted graphic information from several sources into unit records for storage and retrieval. From 1957 to 1962, Bud was Project Manager of the whole development program.

In 1962, Bud moved to United-Carr Incorporated (later a division of TRW Inc.) where he introduced a new type of coaxial cable with a plated copper conductor particularly suited for X and K band microwave use, a catalytic burner for use in self-cleaning ovens and a thermal hydraulic actuator for use in servo control applications for automotive and appliance industries. During his time at United-Carr, Bud was the inventor of a patent for sintered coaxial cable, and co-inventor of patents for a grooved coaxial cable connector and high-speed thin film memory.

In 1969 Bud became Executive Vice President and Chief Operating Officer of the Ealing Corporation, producing a wide range of educational products and optical instruments including single concept motion picture films, physics and chemistry laboratory apparatus and optical research instruments. He founded Daedalon Corporation in 1971 and held the office of President until the company was sold in 2007. Daedalon produced scientific teaching equipment, electronic instruments and optical research support equipment in the United States and throughout the world.

Bud was a fellow of the Optical Society of America and a member of the Society of Motion Pictures and Television Engineers, the American Management Association, the Institute of Electrical and Electronics Engineers and the Society of Sigma Xi.

Bud died on June 1, 2015, of complications from Parkinson’s Disease, leaving behind his wife, five children, seventeen grandchildren, twelve great-grandchildren and one great-great grandchild.