When alumnus Jim Courtney (EngSci 6T6) filled out the application to volunteer at the 2015 Toronto Pan Am & Parapan Am Games, it was the first step of more than half a million he would take. 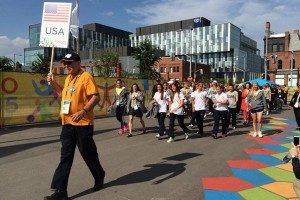 Pan Am volunteers marching along the University of Toronto Scarborough campus

He thought he might be assigned as a stadium attendant. What he ended up experiencing went way beyond his expectations.

For the Pan Am Games, Courtney was initially tasked to be a National Olympic Committee (NOC)/National Paralympic Committee (NPC) assistant, working with a designated Olympic committee to ensure their athletes and support teams have a great experience during the games. READ MORE