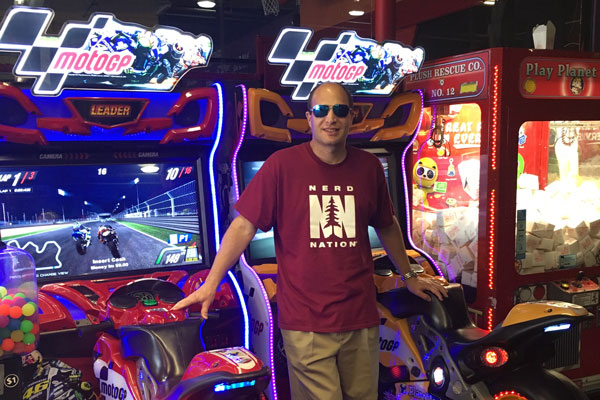 For as long Rick Baltman (EngSci 9T2) can remember, he has wanted to be an astronaut. And while he’s still chasing that dream, his passion for aerospace has propelled his career from the red carpets of Hollywood to the launch of Apple’s iPad.

Baltman, a simulation software engineer and president of 2XL Games, has seen his work featured in films such as Star Wars: Episode I — The Phantom Menace and Pearl Harbor, and in TV ads for Apple. Millions of people have enjoyed playing his video games, like 2XL Supercross and X Games Snocross. And the seeds for his varied career were sown while he was still an undergraduate student at U of T Engineering.

“In my senior year, I worked with Professor Lloyd Reid on F-4 and F-16 fighter jet flight simulations at the University of Toronto Institute for Aerospace Studies (UTIAS),” he said. “That experience has directed my life more than anything else. Between video games and movie special effects software, it’s all built around simulation. To this day, I can trace the roots of some of my code back to the code I wrote at UTIAS.”

Of simulators and satellites and collaboration

Baltman graduated from U of T Engineering in 1992 and went on to earn a master’s degree in aeronautics from Stanford University. His first official job out of school brought him back briefly to the Greater Toronto Area, where he designed flight simulators for the McDonnell-Douglas F-15 Eagle, Airbus A320 and Boeing 767 at Atlantis Aerospace (now called Atlantis Systems International, Inc.).

A desire to relocate to the United States led Baltman to accept a job at Virginia-based Orbital Sciences Corporation, a company that specialized in the design, manufacture and launch of small- and medium-class satellites and rocket systems. It was there that he met a colleague who would alter the trajectory of his career forever.

“I had a friend named Kevin Shawley, whose job was to make animations of the rocket launches and satellite deployment for TV news coverage,” he said. “All of the engineers would look at them — myself included — and complain that they weren’t really accurate. He’d say, ‘How am I supposed to know? I’m just an artist.’ I told him to use our engineering simulations — which I had written — to drive the animation.”

Baltman spent a weekend outputting all of the simulation data into a format that Shawley could input into his animation program. When they displayed their work the following week, Baltman said that everyone at the company was in shock.

“We looked at each other and smiled and thought, ‘Hey, this is a good idea. Why don’t we do this as a business?’”

But it wasn’t until a visceral reaction to a Hollywood blockbuster that Baltman and Shawley were pushed to make it happen.

From Independence Day to independent business

In 1996, Independence Day topped the box office, but it didn’t gain fans in Baltman and Shawley.

“All of the F-18s in the film flew horribly,” Baltman said. “They did crazy, unrealistic things, like flying straight up in the air for 10 minutes. Most people don’t know and don’t care, but as an aerospace engineer and pilot, I could tell that it looked ridiculous.”

Baltman and Shawley knew they could do better. For six months, Baltman would wake up in the morning, sit down in his dining room and program until midnight. Long hours in front of a computer weren’t fun, but Baltman knew they were on to something.

“As we got closer to the end, we reached out to different animators and they couldn’t wait to get their hands on the software,” he said.

May the force be with ReelMotion

Baltman is a huge Star Wars fan. When he heard that director George Lucas was filming the first of the three prequels for the franchise in 1997, he knew he had to get in touch.

Baltman didn’t know Lucas, or anyone in Hollywood. But he was familiar with Dennis Muren, an Oscar-winning special effects artist and supervisor from the original Star Wars films. Muren happened to be listed in the San Francisco phone book, so Baltman gave him a call.

“He actually answered,” Baltman said. “I said to him, ‘I’m sorry to bother you, sir, but I’ve written some software that does special effects. It’s a flight simulator — would you be interested?’”

Although he was never specifically told how the software was used, when Baltman saw The Phantom Menace, he suspects it powered both the space battles and pod racing in the film.

By the end of the ’90s, ReelMotion would be used to simulate vehicles in a number of Hollywood films, including Inspector Gadget, Mission to Mars and Pearl Harbor. The software gained interest from automotive companies to animate computer-generated vehicles in TV commercials. It was also used by accident reconstruction artists to recreate Princess Diana’s fatal collision for court proceedings. NASA even purchased a copy.

After conquering Hollywood, Baltman and Shawley set their sights on their next move: video games.

“We were busy working on the second version of ReelMotion — featuring cloth and fluid dynamics simulations — using computational fluid dynamics that I learned at U of T from Professor David Zingg,” Baltman said. “We saw an opportunity with video games. I re-wrote the code and packaged it as a software development kit (SDK) to sell to other people to use in their programs.”

When the new and improved ReelMotion software was presented at a tradeshow, it sparked a small bidding war among a trio of companies. Baltman and Shawley couldn’t pass up the opportunity and eventually sold their software to Rainbow Studios, a Phoenix-based video game company. The first game to launch with his software was a title for Sony called ATV Off-Road Fury, which was bundled with every single PlayStation 2 during its launch.

“It was the very first video game with full vehicle dynamics, which was software that I wrote,” Baltman said. “It became a huge hit.”

He would spend six years as a senior simulations engineer at Rainbow Studios, which was bought by THQ in 2002, working on a number of popular games, including Splashdown, Matt Hoffman’s Pro BMX and a sequel to ATV Off-Road Fury. By 2005, it was time to strike out on his own, founding 2XL Games with a colleague.

Taking a bite out of Apple

Baltman and his 2XL Games team spent three years developing Baja: Edge of Control, the first title for his company, which was released for the PlayStation 3 and Xbox 360 in 2008. It was also the same year that the world entered a major financial recession, and 2XL Games struggled to secure its next publishing deal.

“At the time, we were watching what Apple was doing with the iPhone, which was just announced the year before,” Baltman said. “We bought one and saw that it was powerful — it was the future. Nobody would buy a console for their living room any more when they could play a game on a device from their pocket.”

2XL Games developed the dirt bike racing game 2XL Supercross, its first for iPhone’s iOS operating system. According to Baltman, it was around the 400th app on the App Store at the time of its release — there are now approximately 2.2 million.

“We got a call from Apple saying they’d like to feature 2XL Supercross in their TV commercials,” he said. “It helped to push 2XL Supercross to become the seventh-highest-grossing game of 2009.”

When the iPad was first announced at Apple’s keynote event in 2010, Scott Forstall, then senior vice president of iOS Software at Apple, played 2XL Games’ 2XL Snocross to show off the iPad’s impressive graphics capabilities.

“We didn’t even know they were going to use the game for the demo,” Baltman said. “We were watching the event online like everyone else and then — there’s our game on stage! Our jaws hit the floor.”

2XL Games and beyond

2XL Games continued to develop a variety of titles for mobile platforms, both Android and iOS. The company recently partnered with Play Mechanix to develop MotoGP, a coin-operated arcade game, and is currently working on the next series of BMX vs ATV Supercoss games for the PlayStation 4 and Xbox One.

Despite Baltman’s entrepreneurial success, he isn’t quite ready to let go of his dream of interstellar travel just yet.

“Last year, when Canada put out a call for its astronaut program, I stuck my name in the hat,” he said. “I’m 46 years old now. I gave it one last shot.”

Although he didn’t make the cut, he still enjoyed the experience.

“There’s a lot of luck involved with being successful,” he said. “But you have to put yourself out there first so you can allow the luck to happen to you.” 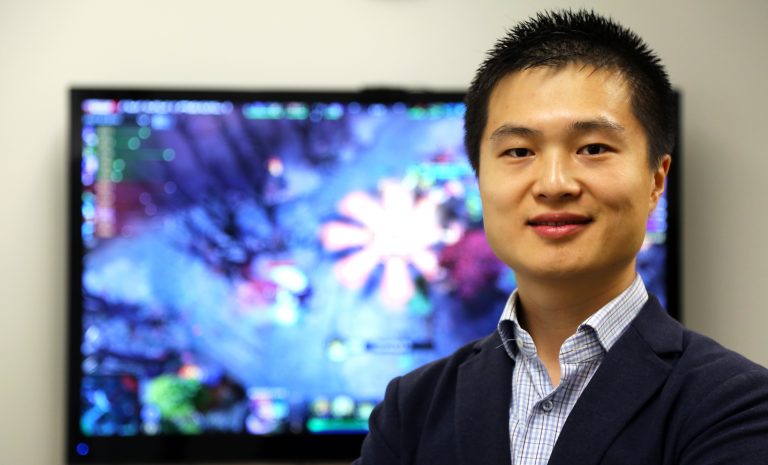 Victor Xin (EngSci 0T8 + PEY) was motivated to fund a new scholarship by his own experiences as an undergraduate student. (Photo: Jamie Hunter)

“We need to reward the mavericks amongst us who may not fit into the mold of a traditional leader,” said Victor Xin (0T8 + PEY), reflecting the spirit of EngSci.

This sentiment inspired Xin to start a new scholarship for an engineering student with high academic marks and a passion for eSports. eSports stands for electronic sports, a.k.a. the ever-expanding world of competitive video gaming, where top prizes can be in the millions of dollars. Xin’s generous donation will support a student who has shown leadership in this community while maintaining high academic achievement.

Read more about U of T Engineering’s first scholarship for students involved in eSports.